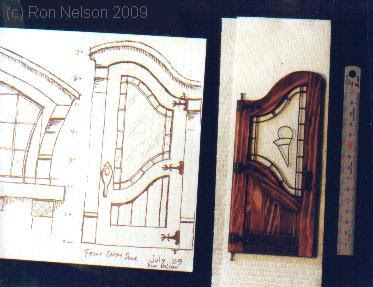 Layout & fabrication of the front door

For the Bakery / Sweetshop project, I started with the most basic element, the front door. I did a whimsical sketch on graph paper to keep it in a 1/12 scale, then used it as a template to cut the pieces.

I like to use 4 penny finish nails as the hinge pins. I always prefer this to store bought miniature hinges that wear down and deform over the years. When I build the threshold and header frame, there are holes to receive the nail heads, with a small washer as a spacer in between. The "Old World" hinges are just made from bits of basswood pieced together in place, drawn black with a sharpie. Because everything is wood (except the clear Plastic of course), its all carefully glued with white glue, then wood stained. 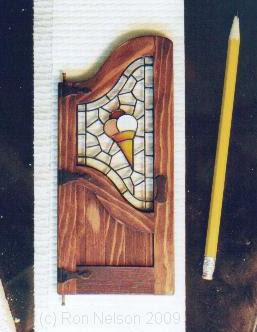 The stain glass "lead" is just a thick black thread about 2mm thick, carefully glued on with white glue. As a rule, it doesn't stick to clear Plexiglas in the long term, but it will hold it down long enough to drip in the color inks.

The ice cream cone was just an afterthought. Originally, it was just going to be the random pieces of glass, clear in the middle with a color border. This piece is a Sweetshop / Bakery, so it stands to reason there may be ice cream as well, plus the fact that Snowfern makes the most amazing mini ice cream cones :)

The coloring is from the kids 'light catcher' craft toys where you drip the color inks into the clear plastic frames then hang in the windows. For the cone itself I wanted to suggest a shadow by using a drop of brown and several drops of yellow, then carefully swirling them together with a toothpick. This is not unlike old world glass, to have distortions and color variances. The clear is used in the other open reservoirs which completely lock down the black thread to the clear plastic. Use very sparingly for the very first coat because its water based and will dissolve the white glue and the black threads will just liquify into a messy bowl of spaghetti. Just a single drop of clear (or color) and carefully move it to the strings and let it soak in then dry overnight. That locks them down. The next day, refill the reservoirs with multiple coats, filled to the top (the clear is like milk, but dries clear). As it dries it recedes down and can take another coat again in a couple hrs. Mix colors, add clear over colors, have fun with it. 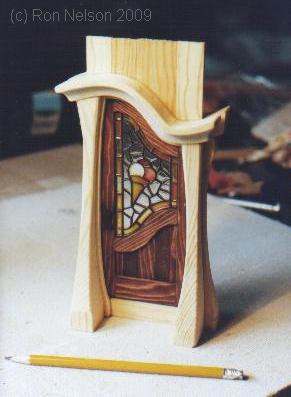 The finished door from the outside

The door and frame should always be a complete unit then installed rather than trying to make it all as separate pieces and build into the wall. Work out any problems on the workbench rather than deep inside a room box.

I cut all 4 vertical frames (2 inside 2 outside) at once on the table saw, then shaped the freehand look on the band saw and spindle sander. The actual jamb is 1/16 thick and follows a parallel cut to the thicker frame, just stepped in slightly.

Only the outer (exterior face) frame & jamb can be cut on the freehand curve. The door itself and the interior frame must be true vertical, or else the door can't swing inward. The effect therefore is an illusion that the exterior face of the door is just as "crooked" as the frame. 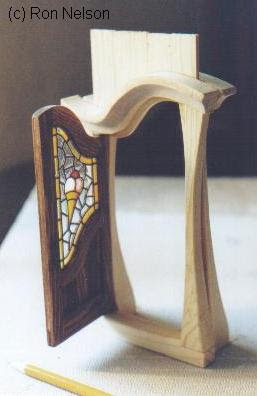 The finished door from the inside

Typically an exterior door swings into a house. The exterior side gets the free form crooked frame, but the inside must have a straight vertical frame parallel to the hinges or the door will bind up when you try to open it.

Technically, you could curve the doorknob edge as well like on a Hobbit-type house, I will play around with that on another door sometime.

The header above was stacked pine pieces and parallel cut on the band saw then spindle sanded. The compound curve within was just 2-part polyester resin spread in the stair step, then a dowel with a rounded end drug thru it for the finished effect.

The door now swings nice and free with no friction. The wood fin above is the attachment surface to the rough cut opening in the wall above the door. There are slots along the 2 sides for the same vertically (they just weren't in the picture).
Posted by RND Modelshop.com at 10:43 PM