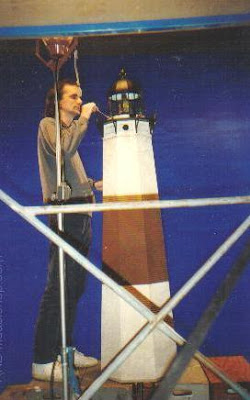 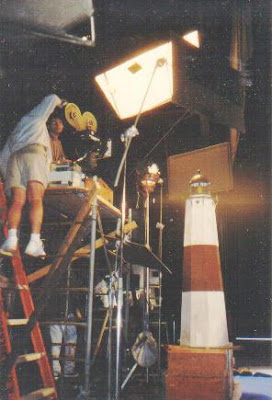 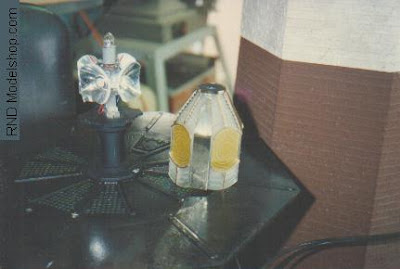 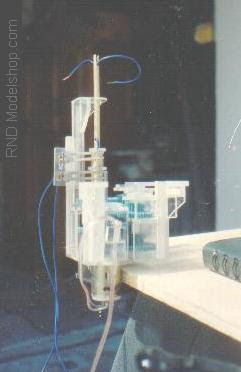 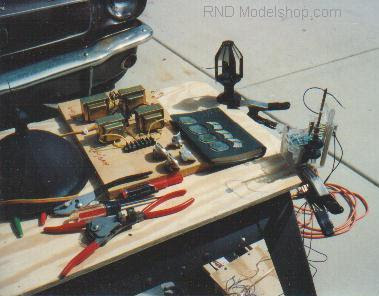 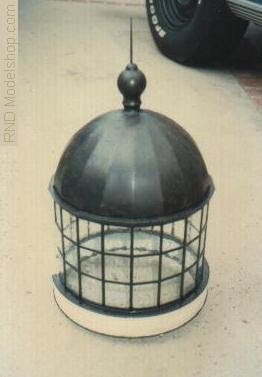 The roof of the dome is made out of 1/16" plexiglas. Each 'wedge' is like a flat slice of pizza that I heated on a cookie sheet in the oven, then pressed between 2 wood forms that I had pre shaped on the bandsaw. The lightning rod, ball & turning underneath are just wood. The vertical windows are also 1/16 plex with thin styrene mullions over the mitered seams. The brickwork along the base is a resin casting bent around a curved form.
Nowadays they would do all of this in a computer rather than make a scale model. Who knows, maybe there were special effects shots in the last program you watched, and didnt even know it!
To see more, please wisit my website RND Modelshop.com
Let me know if anyone has seen the movie!
Posted by RND Modelshop.com at 9:03 PM 6 comments:

Stellated 4 point Tetrahedron in a Cube displayed diagonal on a stand. 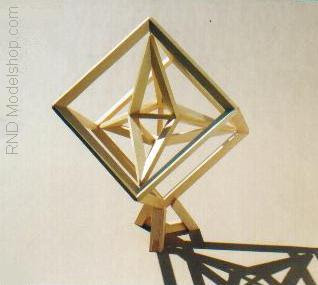 The 4 axis of a Stellated Tetrahedron (below) exactly correspond to 4 of the 8 interior vertices of a typical frame Cube. This can be displayed up on its corner, or just flat on a cube surface. It makes a very nice table top geometry sculpture. 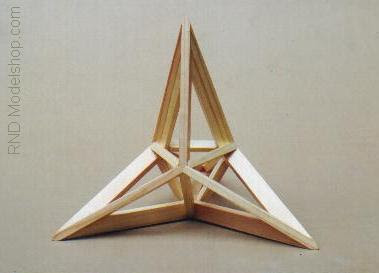 The cube is 9" flat, the entire sculpture is aprox 16" tall in the stand. Each is made to orderand wood stained in cherry (red) walnut (brown) ebony (black) or natural as shown (clear coat polyurethane) that turns an amber honey color as the wood ages.
Posted by RND Modelshop.com at 4:26 PM No comments:

This is the complete set of the 5 Platonic Solids made in wood. These are used in High School & University classrooms, math labs, libraries, and just anyone interested in Polyhedra & Geometry as an art form. 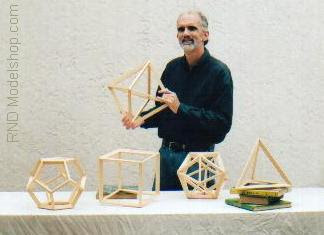 A friend wanted a set for his Physics class and couldnt find any that weren't just paper or plastic so I started making them in batches when I discovered that alot of people had been looking online for them. When they are just clear coated, you can see the cross shadows & depth better in a classroom than with dark stain. For anyone who likes them for a conference table, desk or bookshelf, I stain them cherry wood, ebony, or dark walnut then clear coat them.

From left: Octahedron, Dodecahedron, Tetrahedron, Icosahedron & Cube. I have a few of the Archimedes Solids on my website, but the entire set is not complete yet. I save all the saw jigs & fixtures so everything can be built again & again.
Posted by RND Modelshop.com at 5:23 PM 6 comments:

Dodecahedron made of 20 Triangles

This is an all wood model made of 60 pieces of wood. 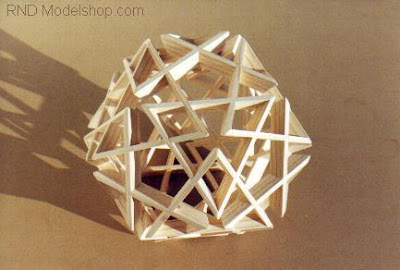 Each piece is identical, with combination X,Y & Z miters so they all bevel to the center of the model. Everything is cut on table saws, sanders, carpentry tools etc, no CNC, CAD, rapid prototyping, laser cutting, just old school power tools 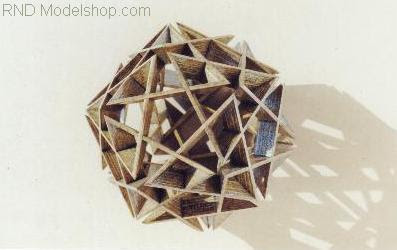 I stain them different colors or just clear coat so you can see the wood grain better. These were common in the 1950s - 60s as light fixtures in a coffee shop (tupically in orange & white plastic) but I make these in wood, just as really cool art pieces.
Posted by RND Modelshop.com at 5:00 PM 2 comments: 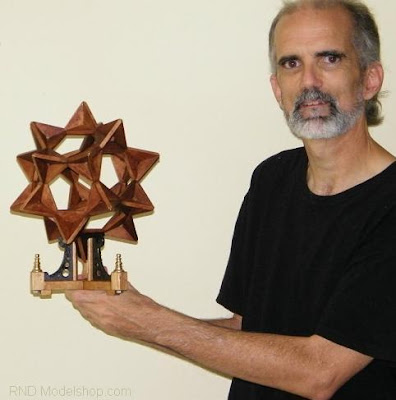 Technically, its an icosadodecahedron (20 triangles, 12 pentagons) but I used 20 small tetrahedrons (6 pieces ea) so there are 120 pieces of wood just in the icosadodecahedron. That added alot more dimension to the finished piece. 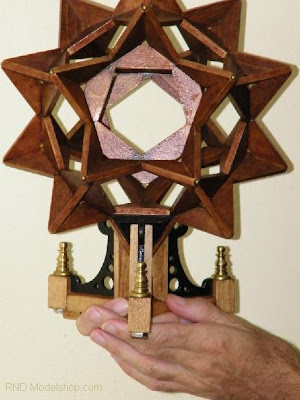 The brass turnings are the knobs that lock down a lampshade, and I made the black 'webbing' in the classic Victorian style from wood. I stained the ball in a rich cherry wood and the base in a lighter apple wood to set them apart. There is a small half round brass nail on each of the tips of the geodesic piece to finish off the Steampunk feel.

When work got slow during the economic down turn, I had to resort to creating my own pieces that could be made and sold relatively quick. Someone had asked me for a wood model of a geometric piece that they could use in a classroom to help the students visualize geometry in 3D space. 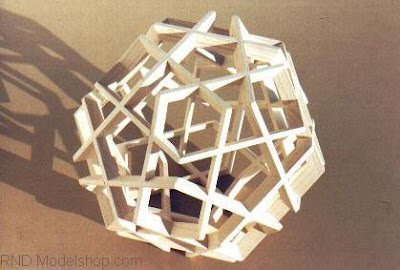 These were always a nice challenge and a change of pace. I rip all of the 1/4" strips from 3/4" shelving then cut all of the notches for the pieces to lock together. Everything is pre-cut on 3 axis (X,Y&Z) so that it assembles without any stresses or forced fits. There is actually very little glue involved, the rest is a very snug press friction fit. 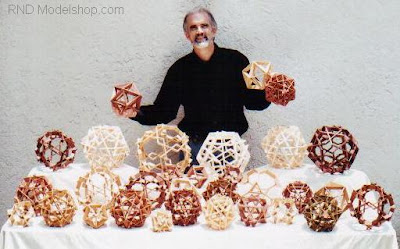 Over time I built up quite an inventory of geometric pieces. Some are stained, others just get a clear polyurethane coating to show off their wood grain. I have many more built that are still in the camera, I will post more of them here as time permits.
Posted by RND Modelshop.com at 8:07 PM 3 comments:

Every so often we would get a call to something completely different. A party rental place in San Diego put out a call for some "Pier Pylons" for a Tiki Safari Beach theme party. 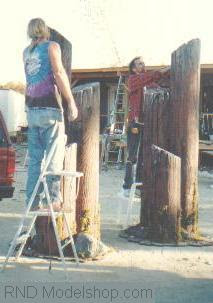 Even though we typically do just miniatures, many of the same faux finishing tricks can be used in full scale. Besides, we have the tools, talented people and plenty of space to work. It was a great way to mix and use up paint from previous projects and put it to good use. 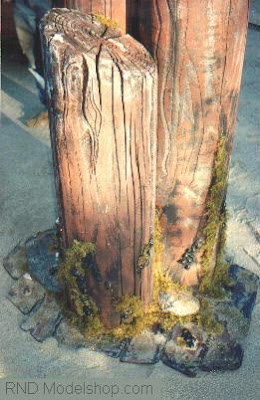 We bought 12" diameter cylinders from a company that makes Styrofoam architectural elements for custom houses. We cut the ends off at an angle and rounded the top corners with hand saws. We threw some coals in the hibachi grill and heated up a couple of hatchets nice and hot. Then we would lay the hatchet on the Styrofoam and it would just melt right into it, then wiggle it while slowly dragging it down the cylinder. As it cooled it wouldn't gouge as deep until it finally cooled to the point that it wouldn't gouge at all. Then we just put it back in the hibachi and switch off to the other hatchet. That kept the look very random and organic. 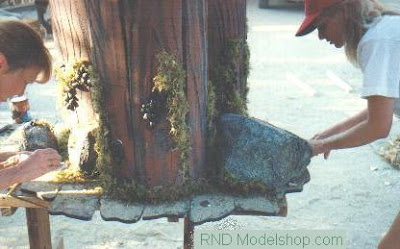 We bonded them together with silicone caulk adhesives and then scenic painted them. The drop off pieces we cut up into big rocks. The barnacles were just macaroni shells, the planks were a single "property for sale" sign we found (that guy probably never figured out why his land never sold). We cut jagged lines into it with a jig saw that looked like individual boards. The seaweed was florist lichen and the bird droppings were just globs of white bathtub caulk. 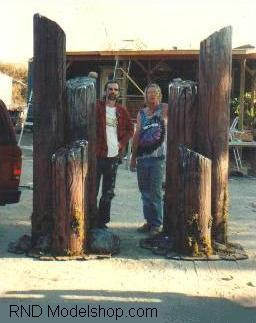 When the truck showed up to get it, they brought along several feet of 2"thick nautical rope that we wrapped around them. They came out great and the client was real happy. We figured that if someone went to put out a cigarette, it would just melt a hole right into it!
Posted by RND Modelshop.com at 10:33 PM 4 comments: